The eighth annual conference in Belfast in October 2010 carried powerful resonances since it conjured up the sense of hope, aspiration and commitment which accompanied the setting up of SCoTENS following an inaugural conference in Belfast 10 years previously. How fitting it was therefore to have ministerial endorsement of SCoTENS’ first decade from Mr Sean Haughey TD, Irish Minister of State for Lifelong Learning, who during his opening address stated that ‘this North-South platform has gone from strength to strength in building professional partnerships and personal networks through its wide ranging activities and research initiatives’.

The point was reiterated by Caitriona Ruane MLA, Minister of Education in N. Ireland, who through her permanent secretary Mr Paul Sweeney, asserted ‘SCoTENS has been acknowledged by commentators as one of the best examples of North-South cooperation.’ She recalled that she had been ‘pleased to hear about the work of SCoTENS at a North South Ministerial Council meeting held last November.’ 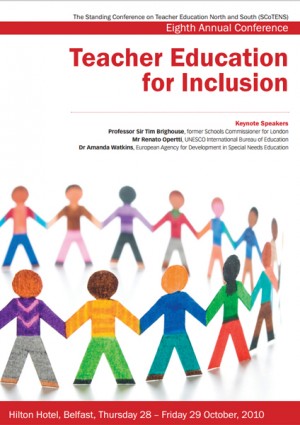