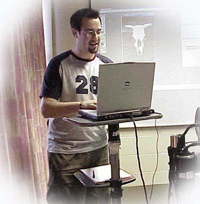 David is a new English teacher in a boys’ secondary school.  In one of his classes he has two boys who have SLD (dyslexia).  A classroom assistant has been allocated to them (Mary) and she started in the school just six weeks before the summer break.  On the first day of term Mary arrives wearing what can only be described as rather revealing clothes.  The boys are rather more interested in Mary than in learning about writing essays.  David says nothing.

Next day Mary arrives again wearing similar clothes.  David wants the boys to attempt to write some poetry of their own. He asks Mary to help generally with the boys’ writing but is horrified when he sees Mary bending over to check the writing taking the boys’ minds off their work. There is very little writing going on at the desks nearby but a lot of whispering! How should David approach what is a sensitive but important classroom management issue?